Meet Vinod Prajapati, our Senior Engineering Manager for Grab Financial Group (GFG). After five years at Grab, he is now officially a ‘Grabversaurus’ (our very own term for someone who has worked with us for five years and beyond). What makes it special is that Vinod has worked in Grab across multiple geographies – he was part of Grab Bangalore’s R&D center and now works out of Grab HQ at One North, Singapore. In these five years at Grab, Vinod has seen both himself and the Grab organization undergo several changes. We had a chat with Vinod to find out more about his experience. 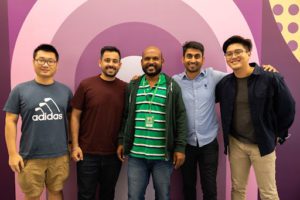 Prior to joining Grab, Vinod was part of several Indian startups. He saw an opportunity to join Grab in 2017. “That year, both fintech and Grab were new to me. The scale at which Grab was operating in 2017 was much bigger than most of the Indian startups that I had worked at before,” explained Vinod.

Grab Bangalore’s R&D center started in 2017, and Vinod was one of the first few employees to join. “I remember when I joined in August 2017, the whole Bangalore office was having lunch together in a small pantry area in our Salarpuria Adonis office in IndiraNagar. We had fewer than 20 engineers at that time. The whole Bangalore team was called the GrabPay team. We’ve grown to hundreds more now and are known as GFG. Our structure now consists of more than ten teams covering specific areas like Lending, Payments and KYC,” said Vinod. As Grab grew its financial vertical, it opened up more opportunities for the team to work on. “Within six months of joining, I was given the opportunity to lead one of the mobile teams. I had some prior experience leading a smaller team but at Grab, things move even quicker than a regular startup, which provides ample opportunities to grow and lead teams if you are able to prove yourself and perform well.”

“I now lead the mobile team which is responsible for building the seamless payment experience for Grab, and also for our online and offline merchants through our superapp. I also lead a few other teams that power the whole of Grab’s analytics and instrumentation events,” said Vinod. 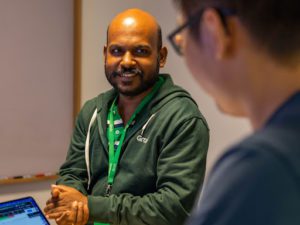 Vinod shares about the difficulties faced when expanding the team: “One of the challenges we faced when we started to grow the Bangalore R&D center in 2017 was around hiring. Not a lot of people in India knew about Grab, as the company’s operational presence is in Southeast Asia. Fast forward to present day, Grab is a well-known technology company in India because of our active participation in the well known tech conferences and events across India. We get a lot of candidate profiles, which shows how far we’ve come.”

Vinod at Grab HQ in Singapore

Speaking about advice to future Grabbers, Vinod said, “During interviews, we look at candidates who are motivated by our mission and have the hunger to create impact. We prefer depth of knowledge, versus breadth.”

“For fresh graduates, we focus more around problem solving skills and for experienced hires, we look into their willingness to handle scalability,” he advised.

Sounds like a career for you? See all our open opportunities at Grab Bangalore!